Power for the mobility turnaround! Fraunhofer IISB is excited about the Joseph von Fraunhofer Prize 2020 for Dr. Bernd Eckardt und Dr. Stefan Matlok. They receive the award for the development of a completely new generation of extremely powerful DC/DC converters - key components for the fuel cell vehicles of the future.

Fuel cells play a key role in the transition to renewables in power and mobility. But the energy efficiency of these cells poses a major challenge, particularly in automotive engineering. The individual components need to be as light and small as possible, yet attain a high efficiency factor. One such component is the DC/DC converter that modulates the fuel cell’s voltage to suit the drive and controls the flow of energy. Conventional wisdom held that it would be impossible to develop a smaller yet more efficient converter. Researchers at the Fraunhofer Institute for Integrated Systems and Device Technology IISB defied that convention, making the impossible possible by developing a new generation of DC/DC converters that meet precisely these requirements. This stride into the future has won the researchers the Joseph von Fraunhofer Prize.

A quick trip to the supermarket or into the city? Battery electric vehicles get the job done well when it comes to short distances. But a fuel-cell drive that converts hydrogen into electricity looks to be the more promising prospect for commercial vehicles, aircraft and ships. However, this requires many components, and they all have to be smaller and lighter to make the vehicle as energy-efficient as possible. One of these components is the DC/DC power converter. It adapts the fuel cell’s voltage to the drive and controls the flow of energy.

Dr. Bernd Eckardt and Dr. Stefan Matlok from the Fraunhofer Institute for Integrated Systems and Device Technology IISB in Erlangen have developed a DC/DC converter that achieves very high efficiency despite its extremely compact footprint – and have garnered the Joseph von Fraunhofer Prize for their accomplishment. The jury hailed the outcome of this effort for its future relevance and successful commercial application. “While conventional DC/DC converters have an efficiency of around 97 to 98 percent, ours achieves up to 99 percent,” says Eckardt. “This may not sound like much at first, but it means that the losses are more than halved – and every tenth of a percent matters.” After all, 200,000 watts of power flow through the converter. A loss rate of one percent would mean that two kilowatts of power dissipate in the form of heat.

In defiance of conventional wisdom

While today’s electrical converters for fuel cells occupy around ten liters of installation space, the Fraunhofer IISB converter takes up just half as much room. In conjunction with its high efficiency factor, this is a sensational advance given that high switching frequencies and small components are generally said to cause greater losses. Defying this conventional wisdom, the two engineers developed new technologies that enable converters to be highly efficient yet very small. “What we've achieved was thought to be impossible,” says Matlok. “And what made it possible was delving deeper into the physical effects of circuits and components. It is this attention to detail that enabled us to understand and take advantage of new physical effects. This led to new switching methods, among other things. What’s more, new technologies are constantly emerging: Our colleagues and specialized companies from the relevant fields are developing ever more powerful individual components, which we as a team can combine to create increasingly powerful converters. After all, Fraunhofer IISB covers all the key technologies in power electronics and has the measuring and manufacturing equipment needed in the various fields.” This is how Fraunhofer IISB takes care of the entire value chain from materials development, chip manufacturing and packaging technology to power electronics systems.

The researchers installed the voltage converter in a car to test its functional efficiency in an on-site climate chamber, where temperatures varied from minus 25 degrees to 50 degrees Celsius. A winter test carried out in frosty Norway by an automaker also went very well. The two award winners intend to set up a company before the year 2020 is out, with a small core team to market the DC/DC converters. 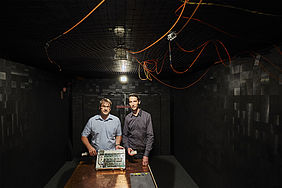